Kato Paphos is the main tourist destination in Paphos region and one of the top holiday resorts in Cyprus and the Mediterranean Sea. Many good hotels, small yet nice beaches, a lot of attractions and activities, restaurants and bars, very good infrastructure make Kato Paphos a very desirable holiday destination.

Kato Paphos area is the heart of tourism for Paphos. Most of the hotels, restaurants, and bars are gathered in this area. At the same time, local people visit the area very frequently, so Kato Paphos is the area where everybody mixes up and mingles. In addition to the infrastructure, there are also a lot of attractions and things to do in the area. This unique mixture of ancient, old and new, variety of accommodation and food, the nice beaches, the sightseeing, and the activities, are what make Kato Paphos area so popular, with hundreds of thousands of visitors every year. 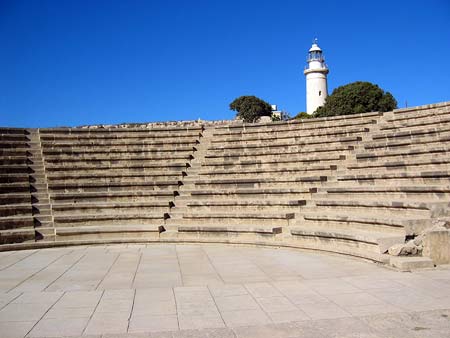 Table of Contents - What is included in this article

Kato Paphos attractions and activities.
Things to do in Kato Paphos

How to get to Kato Paphos

Questions and answers about Kato Paphos

Kato Paphos is a part of Paphos town. Paphos is practically divided into two distinctive areas, Kato Paphos and upper Paphos, or Paphos old town. Both Paphos old town and Kato Paphos are part of Paphos. The difference between them is their proximity to the sea. Kato Paphos (which means lower Paphos) is the area next to the sea, while Paphos old town is about 2 km inland.
While Kato Paphos mainly developed during the last 30-40 years to become the top holiday resort it is today, the old town, as the name suggests, is where the locals used to leave. What changed in recent years is the fact that many foreign people have come and settled in Paphos as well. This blend of the local and foreign people gives a cosmopolitan touch. Paphos old town is centuries old and well worth a visit or two, as there are many things to do and see here.

The area of Kato Paphos counts thousands of years of history. Also, because of its status as a top holiday resort, Kato Paphos offers a lot of facilities for visitors. Combining these together, there are numerous attractions and activities in the area. Paphos Harbour and castle, Paphos Aphrodite water park, nice beaches, sea sports, sea cruises, diving lessons, there is something for everybody. And for those looking for culture and history, Kato Paphos archaeological park, Panagia Chrysopolitissa church and Saint Paul's pillar, Agia Solomoni catacombs, and Tombs of the Kings are ancient sites definitely deserving your attention and visit. Please read this article about things to do in Kato Paphos.

There are some small yet nice beaches in Kato Paphos area. Some of them are awarded a Blue Flag which means that they meet certain criteria such as clear waters, amenities for swimmers and lifeguards. For more information see the dedicated page about Kato Paphos beaches.

Kato Paphos is the heart of Paphos nightlife. There are many places where you can find cafes, restaurants, bars and pubs as well as dancing clubs. Ayiou Antoniou street, the well-known street bar of Kato Paphos, is the place to go for a rather intense night out. During the last years, the epicenter of Kato Paphos nightlife has shifted from Ayiou Antoniou Street, also known as the Bars street. The new epicenter is the renovated street in front of the promenade, which is the street that ends at the harbour. The shops in this area are more family and couples-oriented, so despite losing their importance, the bars street is still the place to go for a boisterous night out.
There are also a number of beach bars, especially in the area of Rikkos beach to the east of Kato Paphos, where you can go for a different night out and join and enjoy a beach party.

How to get to Kato Paphos

If you drive a car, then just follow the road signs towards Kato Paphos, they are clear and it is almost impossible to get lost. There are also local buses which you can use to get to Kato Paphos. They have regular routes connecting all areas of Paphos with Kato Paphos, from early in the morning until late, from Coral Bay to the west to Paphos airport to the east. Click here for directions from / to Paphos airport. Of course, if you stay in one of the numerous hotels in Kato Paphos, then visiting the harbour and castle is just a short and very beautiful walk.

There are many restaurants, cafeterias, and bars in the Kato Paphos area. There are restaurants offering both local and international cuisine. Prices vary depending on the status of each restaurant. Cafeterias, bars and pubs are good places to sit and have a good time socializing while drinking a beer and listening to music. Many of them offer happy hours usually relatively early in the evening.

Questions and answers about Kato Paphos

Find below the answers to a few frequently asked questions about Kato Paphos:

What is Kato Paphos like?
Kato Paphos is a holiday resort right on the seafront. The heart of Kato Paphos is its beautiful harbor. Right on the harbour is the Paphos castle, while at the back of the harbour is the Paphos Archaeological Park, a UNESCO World Heritage Site.
In a radius of 2-3 km from the harbor, there are many hotels and other accommodations, from self-catering apartments up to five-star luxury hotels.
When it comes to nightlife, there are many restaurants, bars, and cafeterias for every taste and every wallet.
Last but not least, there are many small but very nice sandy beaches in the Kato Paphos area, as well as many attractions for everybody, from young couples and families to older couples and groups.

Is Kato Paphos safe?
Yes, Kato Paphos, like Cyprus as a whole, is a very safe place. Serious crime against tourists does not occur, but pickpocket crime does happen, as everywhere with lots of people gathered. Please check this article about safety in Cyprus.

Is there an airport close to Kato Paphos?
Yes, Paphos airport is about ten km from Kato Paphos. There are public buses and taxis that connect the airport with Kato Paphos. Car hire is, of course, another option.

Other interesting articles about Kato Paphos